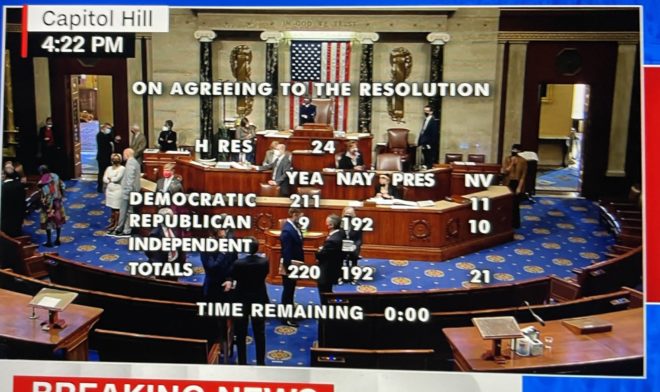 President Donald Trump is now the first President to be impeached twice. The charge: Incitement of insurrection. The vote: bipartisan. Ten Republicansvoted along with the Democrats. The totals: 232 for 197 opposed.

IMPEACHED AGAIN! Final vote is 232 YEA-197 NO. A mere 10 Republicans voted yea. Bipartisan but not impressively so. Blows one's mind: President Trump incites a mob to invade Congress, to kill and destroy, and 197 Republicans make excuses for him. #ImpeachmentDay

Hey @SenatorCollins, think the second impeachment will teach him his lesson?

Even Andrew Johnson wasn't able to pull this off this much winning.

Breaking: Trump is now the first president to be impeached twice and lose popular vote twice

Half the Presidential impeachments in American history will now belong to Donald Trump.