Posted on January 17, 2023
You are here: Home / Featured / Trump and Party over Country 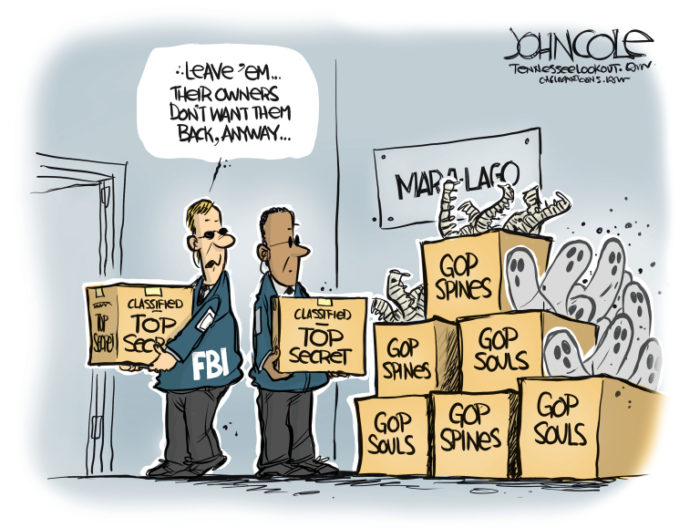 Republican politicians and a large portion of the Republican Party know that Donald Trump lost the 2020 presidential election by millions of votes. The popular vote totals showed 81,200,000+ for Joe Biden and 74,200,000+ for Donald Trump. The Electoral College totals were 306 for Biden and 232 for Trump. Yet despite these overwhelming totals, Donald Trump claimed and still claims that he won the election and that it was stolen from him. Refusing to accept the will of the people in the election, he tried to have election officials change the vote totals in several states where his losses were relatively close. In Georgia, a criminal investigation is now going on regarding Trump’s attempts to overturn the election.

Given Trump’s propensity to lie and cheat, his actions and refusal to acknowledge his loss is not surprising. What is truly astonishing is the willingness of other Republicans to support Trump’s denial of his loss and spout the fiction that the election was stolen. These are supposedly intelligent men and women who hold high offices in the federal, state and local governments. Yet they are willing to bolster Trumps claims and provide them with credibility knowing that this will lead to more support from the Republican base that has accepted Trump’s lies all along. It also casts doubt on the reliability of America’s election system and of democracy itself.

The willingness of Republican elected officials to support Trump’s lies about a stolen election is a major threat to American democracy, convincing many Americans of the veracity of Trump’s claims. It has made numerous Americans question the legitimacy of Biden’s presidency and the various accomplishments of the current administration. It has made partisanship much more rabid and more difficult for Republicans and Democrats to work together at all levels of government.

Why have all of these knowledgeable Republicans who are aware of Biden’s victory refused to accept it as fact and continue to argue that the election was stolen. They surely realize the corrosive effects it has had on American democracy and ignore what it has done and is doing. The GOP politicians are supporting Trump’s claims because they want his backing and that of his base in their future runs for office. Not only do Republican officeholders and aspirants want his verbal backing, they are also hoping for financial aid from Trump and his wealthy acolytes. They know that they are lying for Trump’s benefit, that their lies increases partisanship and divisiveness between Americans, increases the possibility of riots and violence, and are detrimental to America, but they simply do not care. Their belief in Trump’s power and his ability to hurt their political aspirations outweighs their devotion to America and the Constitution. Trumps political supporters are willing to ignore the damage they are causing to American democracy to further their own political goals.

Some in Trump’s base can be excused for their allegiance to their leader and the acceptance of his lies because they are ignorant of the truth and do not know any better. But those Republicans who are educated and knowledgeable about politics, particularly politicians and business people, cannot be forgiven for their collusion with Trump and willingness to sacrifice the nation’s democracy for the furtherance of Trump’s, the Republicans’ and their own ambitions. Shame on them.