TRUMP AND FOX NEWS: DEADLY LIES IN A FEEDBACK LOOP 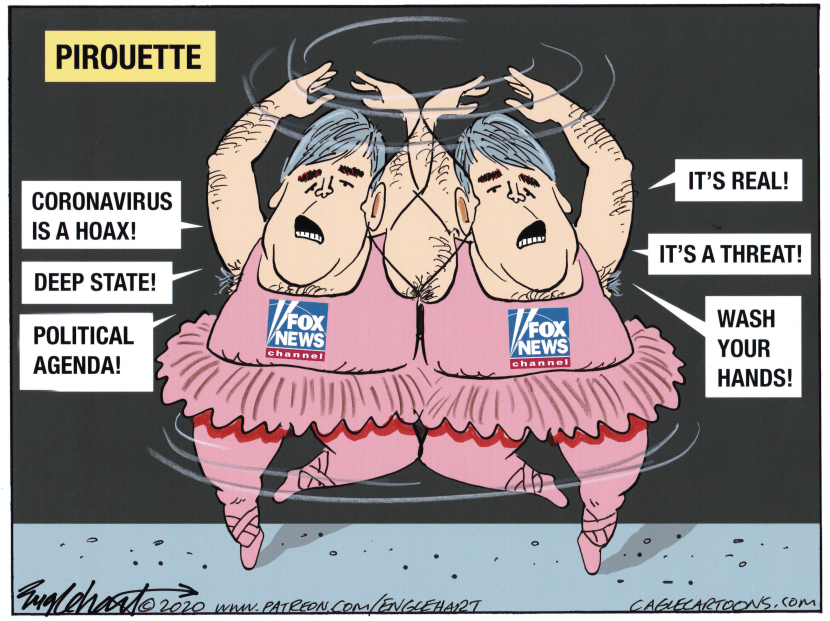 Before focusing on today’s timely topic – Trump and Fox News, deadly together – I want to tell you a little story about the time Fox broke the fake news that President Obama wanted to tax Christmas trees.

In November 2011, I received a string of emails raging at Obama for (supposedly) imposing a tax on Christmas trees, which the angry readers took as fresh evidence of the (alleged) socialist Muslim’s (alleged) war on Christmas and Christianity in general. My reaction was: Huh?

So I clicked around the Internet. It turned out the emails landed within days of a fraudulent Fox News report about “a new Christmas tree tax” imposed by Obama. A trade group, the National Christmas Tree Association, had suggested a 15-cent fee per tree in order to better promote domestic trees, and thus compete more effectively with artificial trees from China. The idea had been around for 20 years. But because the U.S. Department of Agriculture had agreed to consider the fee, as a way to help the domestic tree industry…presto, Fox News framed it as an Obama anti-Christian plot.

I’ve brought up that tiny but instructive episode (lost forever in the incessant Fox News sludge) to remind us that Fox has been spewing disinformation – and breeding stupid people – for a very long time. Numerous studies have long determined that regular Fox viewers are more clueless about factual reality than citizens who get their info elsewhere. This tragic situation has long been a menace to democracy, but now – with the coronaviros crisis – it has turned deadly.

For many weeks, as the pandemic began to spread, Fox News and Trump echoed each other – downplaying the threat, telling us everything was fine. Fox hosts said the mainstream media was inciting “mass hysteria,” that real journalists were “panic pushers,” and that Democrats were whipping up fear in “yet another attempt to impeach the president.”

It’s hard to determine whether it’s Fox or Trump that is most hazardous to our health – admittedly, it’s kind of a chicken-and-egg thing. But rest assured that every sap who watches Fox or listens to Trump, and who then dismisses social distancing as a liberal plot, is a sap who’s imperiling those of us who take science seriously.

On Tuesday, Trump fled to the friendly Fox cocoon for a virtual “town hall,” and spewed lies to the credulous fans at home. And naturally, those lies were not challenged by his hosts. For the umpteenth time, he compared COVID-19 to the common flu (“we’ve never closed down the country for the flu”), but his hosts didn’t bother to point out two obvious scientific facts: that COVID-19 is two to three times more contagious than the flu, and that its mortality rate (according to the World Health Organization) is 30 times higher than the flu.

Trump also declared that he wanted to “open” the country by Easter, April 12: “I would love to have that. It’s such an important day for other reasons, but I’d love to make it an important day for this…Easter’s a very special day for me. Wouldn’t it be great to have all the churches full? You’ll have packed churches all over our country…I think it’ll be a beautiful time.”

Neither host from Fox’s “news” side summoned the moxie to challenge Trump. Instead, one replied: “Oh wow, OK…That would be a great American resurrection.”

They even sat silent when Trump held up a story from a crackpot right-wing conspiracy website that accused New York Gov. Andrew Cuomo of refusing to buy 16,000 ventilators in 2015. They didn’t ask Trump to name or vet his source, or to explain where that (fake) information came from or how it was supposedly substantiated.

So it’s no wonder that Fox News fans are more out to lunch about reality than everyone else. In a poll released last week by YouGov and The Economist, roughly 70 percent of the people who get most of their news from national papers, CNN, MSNBC, and network broadcasts are worried about the coronavirus. Only 38 percent of Fox consumers say they’re worried.

In other words, most Fox fans are a threat. I hope none of them sneeze on us in the grocery line.