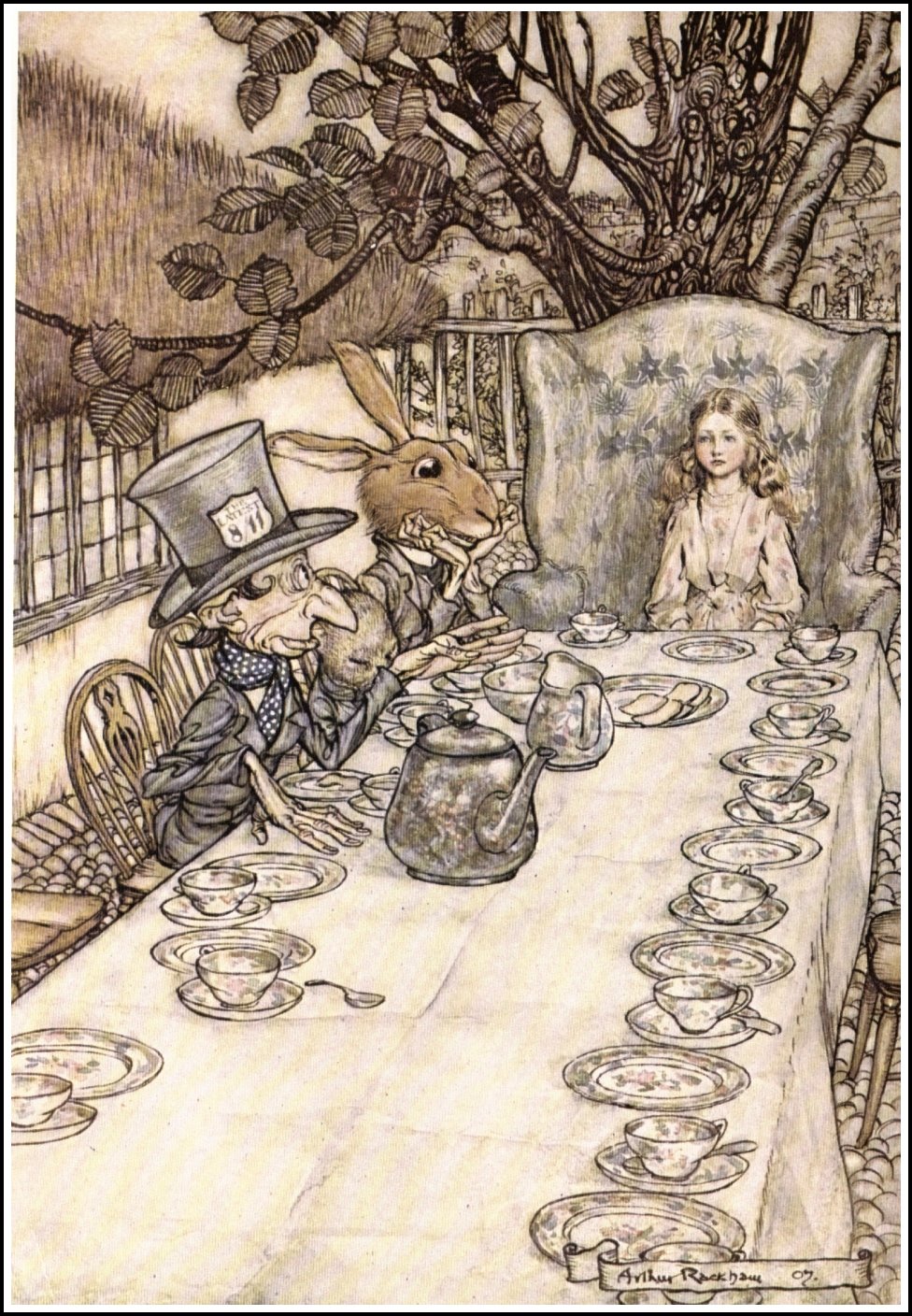 “It’s the stupidest tea-party I ever was at in all my life.”- Alice’s Adventures in Wonderland, Lewis Carroll

TRIGGER WARNING: This essay is about feminism. Any reader feeling under attack should seek shelter in the 1950s.

I’m a wife of a man. I’m a mother of two boys, and a sister of two brothers. When I was 19 and a college student, I burned my bra – an impulsive decision of magnificent proportions. A bolt of lightning had struck me, my friends, and all the women on campus as we suddenly realized that in a patriarchy: women are second-class citizens; socially engineered female traits are considered proof of female inferiority; and equal status with men means that women must man up, grow impressive biceps, get hairy, and enjoy football if they want to have standing in a society that had been ironically founded on the notion of egalitarianism. We found ourselves trapped in the never-ending teleology of the intelligent design crafted by men. We were the weaker sex; a gender reduced to its component parts: its orifices, its soft skin, its place in history as merely an embellished rib.

Some of us struggled to figure things out. I majored in everything. Others became the reification of Stockholm Syndrome – and remained Republicans like their parents. And some emerged as the Torquemadas of the Right – women like the vulturine Phyllis Schlafly.

It was a maelstrom of change. And then it stopped. Manly men took back the reins, and under the rubric of law and order and a dollop of avuncular Reaganisms, feminism died an ignominious death. And women took one in the gut as wages stagnated and America de-industrialized. Two incomes were now required to support a family instead of one. And even though women got to wear white collars to work, their collars were still a bubblegum pink at payday.

But the #MeToo movement has brought it all back because the seas have parted once again, and we are now in a similar moment of change. Finally, we have the chance to revisit the sexual revolution of the 70s. As Bari Weiss, a columnist and opinion editor at the New York Times, noted in an interview with Bill Maher a year ago, the feminist movement “is really a fight between factions of women”. Weiss goes on to say that the debate “is between the hard-left and liberals”. The liberals to whom I believe she refers are those Madeleine Albright so famously spoke to when she said, “We can tell our story of how we climbed the ladder, and how a lot of you younger women think it’s done. It’s not done. There’s a special place in hell for women who don’t help each other!”

You can agree with Weiss, or Albright, or neither, but buried like a tick within this debate righteously sits another Phyllis Schlafly, albeit a more nuanced thinker than Schlafly was, and one with all her tickets punched. Christine Hoff Sommers, resident scholar at the neoconservative American Enterprise Institute and troll of contemporary feminism, was on Bill Maher’s show last week as the interviewee, and she came down like a hammer on the hard-left in the feminist debate. With comments like these:

“Getting back feminism is proving impossible…. One young woman at the University of Pennsylvania said to me, “Oh, I was mini-raped when he walked by and said, ‘Nice legs’”; “Male privilege is a conspiracy theory – men have privileges, but so do women.” “Women work, most of the pay gap is explained by the fact that men are willing to work just punishing hours, weekends – women don’t do it as much – that’s because men and women behave different in private life.” And, “If you want to make a lot of money, petroleum engineering, metallurgy, naval engineering [are the way to go] – women are in early childhood education; it’s complicated.”

This new style of glib nonsense deserves the gimlet eye of a grizzled old feminist. Though Sommers’s argument was breezily peppered with unsupported data and a boatload of anecdotal nonsense, the general thrust was that today’s young women are snowflakes, helicoptered into reality by their lotus-eating parents. They lack the “Right Stuff”, a characteristic claimed exclusively by the American Right Wing. They are “timid”, “ungrateful”, “spoiled”, and wont to “hysteria”. And this, notwithstanding the fact that women are expected to determine the outcome of the 2020 election; that they’re demonstrating all over the world for equality under the law, and that they’re real mad.

This nonsense is redolent of the bad old days when relegating masses of people to second-class lives through the use of logical fallacies was routine. African Americans were “dirty and ineducable”, while they were forcibly denied access to sanitation and education.

A Millennial asked me the most consequential question of this debate about the new feminism. He asked, “How can I be a man who respects the rights of women – of their right to dignity and equality with men – while still being a primate steered by the volatility of testosterone and the desire to blow things up? As a wife, a mother, and as a sister, I know that this evolutionary paradox is where we really need to be looking. I reminded him that as a 19-year-old, I had to reimagine what it was to be a woman – and that this time around, it will be time for young men to reimagine what they must be in order to be a man.