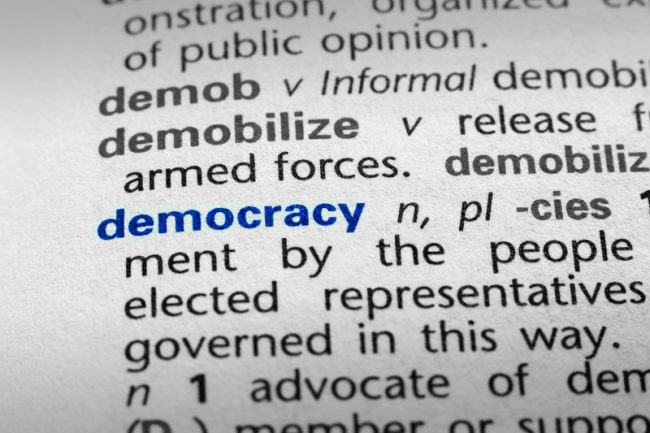 Over 100 democracies have been invited to the virtual conference to be held on December 9th and 10th. No dictatorships have been invited. The list of invitees includes Taiwan, a huge symbolic slap in the face to China and all authoritarian regimes. This democracy-only exclusivity is an opportunity to slow, stop and perhaps reverse the rising tide of authoritarianism. At the conference there will be many inspiring speeches and vague pledges to take action in the future. Rhetoric unfortunately does not necessarily translate into actual action. What steps need to be taken to assure that the conference results in more than talk?

The first action item should have taken long ago: expand NATO to include all democracies. NATO, the North Atlantic Treaty Organization was formed in 1949 to oppose further Russian expansion into Europe. All the member nations of NATO are democracies, with the current exception of Turkey. In the 21st Century NATO’s mission expanded beyond Europe, as many NATO countries had troops in Afghanistan. The expanded mission makes sense because the authoritarian threat is world-wide, not just in Europe. If the missions of NATO expand globally, expansion of its membership needs to follow suit. NATO is the only effective multi-national military force in the world, and it has always represented democracy. All democracies should join NATO and contribute resources and troops to its mission, and, most importantly, take and adhere to the NATO pledge that all member nations will defend any member nation threatened or attached by authoritarian forces.

The second step would restructure another multi-national organization: the United Nations (UN). In 1945 the UN was formed with a fatal flaw- dictatorships were allowed to be members. In hindsight this flaw is puzzling given that WWII was fought to thwart dictatorial ambitions. Consequently, the UN has been ineffective at stopping genocide, expanding human rights and promoting democracy. Now is the time to correct this mistake by disbanding the current UN and reforming it as a democracy-only organization. If this happens the expanded NATO forces could become the multi-national military force for the reformed UN.

These recommendations are based on a fundamental premise: all forms of authoritarian dictatorship are enemies of democracy. It doesn’t matter whether the form is called communism, fascism, Islamism, theocratism, or cronyism. However, critics of these suggestions might say that uniting democracies creates an Us versus Them world, increasing the possibility of World War III. The response to this criticism is that authoritarian regimes have already created an Us versus Them world; we just haven’t recognized it yet. The two most powerful dictatorships, China and Russia, have rekindled their Cold War partnership because they both have the same goals, to destroy democracy and Western values.

Perhaps the worst aspect of democracy is how slow democracies are to recognize and respond to threat. If Winston Churchill was alive today he would nod his head in recognition: we are making the same mistake today that democracies made with Hitler in the 1930s. Hopefully the Democracy Summit will serve as a wake-up call.