Posted on January 20, 2021
You are here: Home / Featured / Rudy Giuliani: From America’s Mayor to America’s Hack to America’s Punchline 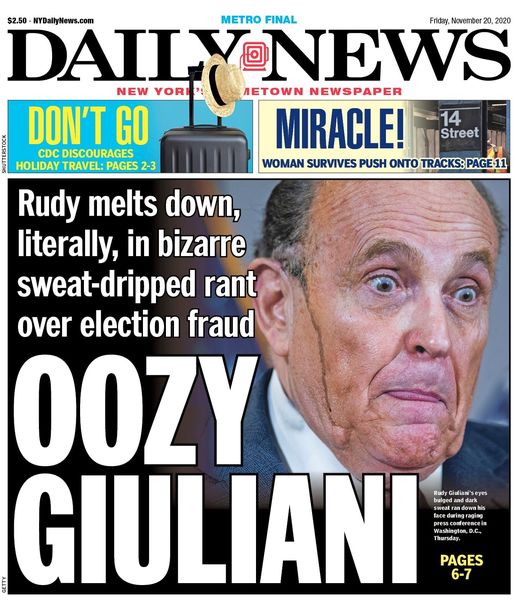 Let’s face it. Someday there likely will be a Netflix movie about Rudy Giuliani who has gone from being “America’s Mayor” after the leadership and reassurance he offered in the immediate 9/11 aftermath, to one more political hack when he ran for President — and now to a punchline. And a pernicious toxic force in both politics and the world of facts.

Seldom have we seen a public figure move from such a lofty perch in the public perception to a figure of ridicule and an instant punchline. We’ve seen public perceptions radically change before. Note O.J. Simpson (the murder trial), Mel Gibson (film hero to anti-Semite), etc. In politics, South Carolina Sen. Lindsey Graham went out to golf with Donald Trump, who he had previously blasted, right as his supposedly best bud Sen. John McCain’s battle with cancer was at the tail end. Graham then became one of Trump’s staunchest defenders who couldn’t say a sentence without talking about “liberals liberals liberals” or the “Democrat Party” (it’s the Democratic Party).

But Giuliani — unless he pulls off a shocking Trump theft of the 2020 Presidential elections — has now become a figure of contempt among many who once respected him, a figure of derision. And a Godsend to comedians, meme creators.

It didn’t help when at a press conference called to lay out Trump’s case for going above the voters and taking the battle to the courts and electors, Giuliani had brown streaks running down his sweaty face creating images, videos and memes that will become part of his (questionable) legacy.

It’s very simple, according to Rudolph W. Giuliani and the rest of President Trump’s legal posse, but also very vast. China is in on it. Cuba is in on it. Antifa and George Soros are in on it. At least two presidents of Venezuela, one dead and one living, are in on it. Big Tech is in on it; a Web server from Germany is involved. (There’s always a server involved.) Multiple major U.S. cities are in on it, as are decent American citizens who volunteer at polling precincts. Argentina is in on it, too, sort of. Chicago Mayor Richard Daley was in on it back in 1960, when, according to an unproved conspiracy theory, he stole the presidency for John F. Kennedy, thereby launching an ongoing pattern of corrupt cities stuffing or scrapping ballots. The “it” is a massive, premeditated scheme to steal the election from Donald Trump, according to Giuliani, and it also involved corralling poll watchers at great distances from the ballot counting.

…Fifteen minutes later, as he was describing the election results as “a massive fraud,” black liquid began to slowly streak from each of his temples, down his cheeks. It might have been perspiration liquefying his hair dye, or sluicing the black polymer off his eyeglasses. One Manhattan stylist told the New York Times that it might’ve been running mascara; perhaps Giuliani had applied it to touch up the color of his sideburns.

Now we have the answer.

Rudy Giuliani is an attorney to dye for.

Rudy Giuliani apparently woke up this morning and said “Let’s make that Borat scene with my hands down my pants the second most embarrassing thing I’ve done this year” https://t.co/Gqpn4LiVSa

Here's why you should hire union hair and makeup professionals: pic.twitter.com/84urAAuh9E

One thing we know for damn sure: those weren’t brains leaking out of Rudy’s head.

Right now, someone at @nbcsnl is showing Lorne a test of a hair dye leak system that will fit under Kate McKinnon's Rudy Giuliani wig.