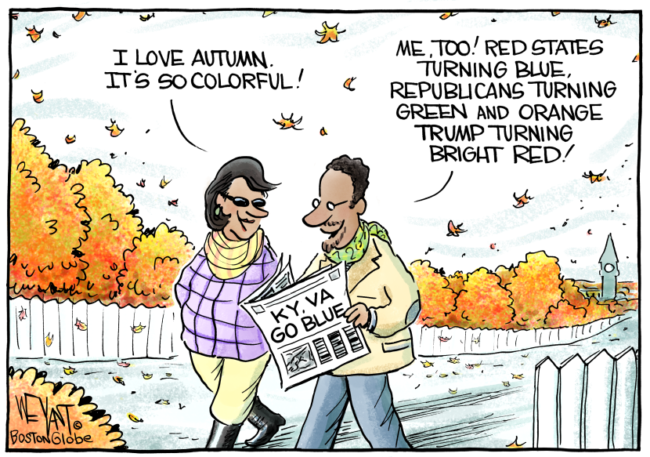 The lesson of the 2019 state elections confirmed the lesson of the 2018 congressional midterms: Donald Trump can stage all the demagogic rallies he wants, but he’s powerless to reverse the GOP’s hemorrhaging in the populous suburbs.

Let’s borrow one of his favorite metaphors. On Tuesday night, his captive Republicans died like dogs. Or, as party strategist Alex Conant told the Associated Press, “Republican support in the suburbs has basically collapsed under Trump.”

Today’s suburbs, once typically lily white, are racially and ethnically diverse, and bursting with people (especially women) who have college educations. This means they’re bright enough to read the news, see Trump for what he is, and be rightly repulsed by a craven Republican party that abets and excuses his serial abuses of power.

And now we’re seeing the payoff. One year ago, Democrats recaptured the House in an historic blue wave that subsumed Republican suburban seats even in red redoubts like South Carolina, Kansas, Iowa, Oklahoma, Georgia, and Utah. And in this week’s 2019 elections, Virginia Democrats snatched both legislative chambers for the first time in a generation, wiping out every last Republican (including a state House GOP leader) in the Washington D.C. suburbs. A Muslim woman even won in the Richmond suburbs, ousting a Republican state senator who’d long sought to weaken Obamacare.

Most of Virginia’s Republican candidates tried to distance themselves from Trump, but the voters punished them anyway. Down in ruby-red Kentucky, incumbent Republican Gov. Matt Bevins tried the opposite tack, embracing Trump and stumping with an anti-impeachment banner, but voters in the Louisville and Lexington suburbs punished him anyway. Most notably, in the vote-rich suburbs across the river from Cincinnati – the same suburbs he’d won easily back in 2015 – he was wiped out.

Kentucky will surely vote for Trump in 2020, but it’s far less certain that pivotal Pennsylvania will do so for the second time. Republicans have long been losing clout in the Philadelphia suburbs, but Trump’s toxicity has greatly accelerated that trend, especially at the grassroots level. In the 2019 elections, Democrats took control of suburban Delaware County for the first time since the Civil War, captured a governing majority in suburban Chester County, and did the same in suburban Bucks County for the first time in 36 years. Those results may well foreshadow a titanic blue turnout when Trump is (presumably) back on the ballot, where his rural and small-town fans may not be numerous enough to hold back the wave.

And that’s the Trump team’s core quandary. It aims to maximize rural and small-town turnout (especially among non-college white men) in the handful of states that will sway the Electoral College, in order to offset massive losses in suburbia and, of course, in the cities. But that math may not work, because suburbia is where the most votes are. Tom Davis, a former national Republican leader, warns: “What’s happening is that the fast-growing areas (are) where the Democrats are doing better. There aren’t enough white rural voters to make up the difference.”

Dennis Bonnen, the speaker of the Texas House of Representatives, recently put it more bluntly. In an audio recording obtained by The Washington Post, Bonnen was heard whining to an ally: “I just think we’ve got to get through 2020…With all due respect to Trump, who I love by the way, he’s killing us in the urban-suburban districts.”

True that. Spiking Democratic turnout in the Texas suburbs – and the defeat of two GOP House incumbents in the 2018 midterms – have prompted at least five House Republicans to announce their “retirements.”

Reality-based Republicans are well aware that they need to reconnect with educated white-collar suburban voters, especially women. But, alas, they’re tethered to a font of intolerance who becomes more toxic with each Orwellian lie. And they’re tragically too timid to revolt.

Twice now, in successive years, the suburbs have sent Trump a message, but he’s too pig-headed to hear it. And I’m reminded of a scene in Citizen Kane, when a political boss warns the megalomaniacal mogul: “If it was anybody else, I’d say what’s going to happen to you would be a lesson to you. Only you’re going to need more than one lesson. And you’re going to get more than one lesson.”

Copyright 2019 Dick Polman, distributed exclusively by Cagle Cartoons newspaper syndicate. Dick Polman, a veteran national political columnist based in Philadelphia and a Writer in Residence at the University of Pennsylvania, writes at DickPolman.net. Email him at [email protected]