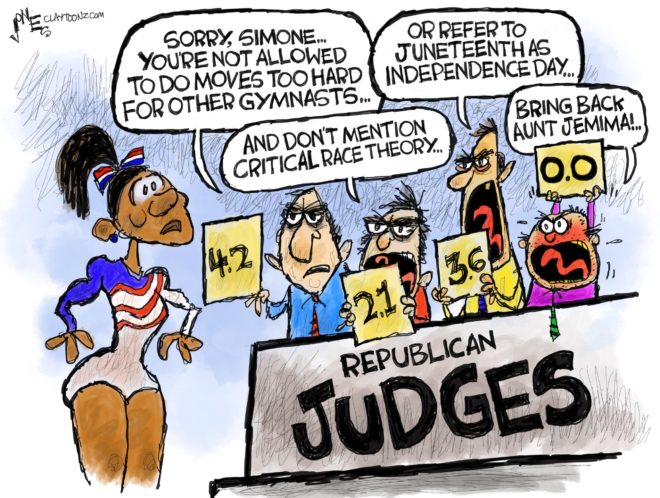 Simone Biles is the greatest gymnast in the history of gymnastics. In fact, in the world of gymnastics at the age of 24, she’s old. But that doesn’t seem to matter to Simone because nobody can do what she does.

Last month at the U.S. Classic, Simone Biles performed a move that had never been attempted before by a female gymnast at a competition…and she crushed it. The Yurchenko double pike is a difficult, and dangerous move, that nobody else is probably even training to perform. As The New York Times describes it, to execute it (this is where I cut and paste), a gymnast first must launch herself into a roundoff back handspring onto the vaulting table, and then propel herself high enough to give herself time to flip twice in a pike position (body folded, legs straight) before landing on her feet.

Did you understand any of that? I did. It means it’s hard. I think I pulled a hammy just watching her do it. At this point, she’s competing against herself. After she did the move, the crowed went wild and the judges…eh. They gave her a score of 6.6, which is a provisional similar to scores for her other moves. They didn’t give her any points for the difficulty of the move. In the past, they’ve given low scores to other moves Biles can do that no one else can. Why? Because no one else can.

They’re giving low scores to Biles for these amazing moves to discourage them from ever being done. Basically, Simone Biles is being punished for being too good. Do you remember when they did the same thing to Michael Phelps when he was competing, basically against himself as well, because like Simone, he’s the GOAT of his sport.

You don’t remember Phelps being punished because he wasn’t. Well, he was once for smoking pot which really should have been an added boost to his competition. If anything, the Olympic committee should have made Phelps smoke more pot just to give the other swimmers an advantage. Michael Phelps wasn’t just better because he worked harder, but because he has genetical differences that make him better. He’s tall with arms too long for his body, legs too short, and his feet and hands are basically flippers. In fact, Flipper probably couldn’t beat Phelps…even after Phelps smoked a bowl and consumed two bags of Doritos.

In Simone’s case, they changed the rules for a black person.

If all of Michael Jordan’s competition looked like Larry Byrd, they probably would have changed the rules for him too, probably to something like having to dribble while flying through the air or some shit.

Now, will this be taught in the future (not the air-dribbling crap)? Not if Republicans have their way. Republicans in several states are banning the teaching of Critical Race Theory, or as they put it, anything that teaches this nation may be a racist country. Yesterday, President Joe Biden signed a bill making Juneteenth the 11th federal holiday, and the first since Martin Luther King Day was created back in 1986. On the bill’s way to the president’s desk, 14 Republicans in the House voted against it.

The reasons these 14 Republicans have given are incredibly stupid. Some say they were in favor of the holiday but didn’t like it being referred to as “independence day.” Uh, because it’s not your independence day? Republicans, July 4, 1776, was NOT a day of independence for all Americans. Didn’t they teach you that?

Juneteenth celebrates the events of June 19, 1865, when Maj. Gen. Gordon Granger informed enslaved African Americans in Galveston, Texas, the Civil War had ended and they were free. In case you’re a Republican, he told them they were no longer prisoners with jobs. For many black Americans, this is their independence day. This is their July 4. But, because you think it doesn’t affect you then it shouldn’t be recognized? Should we bury it along with the Tulsa Massacre?

Congressman Andy Biggs from Arizona voted against the holiday and said, “They weaponize this bill like they weaponize everything else.” He must think it’s like a face mask to wear during a pandemic.

Tennessee’s Scott DesJarlais voted against it because, “it is fiscally irresponsible to continue to create new paid holidays for federal workers while the majority of hard-working private-sector employees get left to pay the bill.” Does he even know what he’s talking about?

Paul Gosar, another idiot from Arizona, said, “Juneteenth is more debunked Critical Race Theory in action.” How is Juneteenth debunked? Does he know what he’s talking about?

Ronny Jackson….wait. Did you forget about this guy? I did. Yeah, Trump’s former physician who told us Trump only weighed 243 pounds and also lied about his height, is unfortunately a congressman now. He said he voted against the bill because he doesn’t support more paid time off for federal workers. Dr. Ronny represents a district in Texas, the same state that gave us Ted Cruz and Louie Gohmert.

Thomas Massie, a goober from Kentucky, said, “Naming this day ‘National Independence Day’ would create confusion and push Americans to pick one of those two days as their independence day based on their racial identity.” You mean, some Americans may not want to identify with the independence day that did not give their ancestors independence? Somebody get ahold of Representative Massie, grab both sides of his face, put your face within two inches of his, good god don’t kiss him, and repeat the last sentence.

At this point, I’m surprised Marjorie Taylor Greene didn’t vote against it because calling it “Independence day” will only distract us from the accomplishment of Jeff Goldblum and Bill Pullman repelling the 1995 alien invasion.

Here’s the thing about that: Americans are not forced to choose their independence day based on their race. That choice was made for them hundreds of years ago…and it was made by white people. You would know that if you took a real history course.

Congressman Tom McClintock, who voted against the bill said, “I don’t believe it’s healthy to reach into the dead past, revive its most malevolent conflicts and reintroduce them into our age.” Ignorance isn’t healthy either, Congressman. Neither is stupidity and racism.

Matt Rosendale, who is, unfortunately for Montana, that state’s only congressperson, said, “This isn’t an effort to commemorate emancipation, it’s very clearly tied to the larger hard-left agenda to enshrine the racial history of this country as the prime aspect of our national story.” Hey, he gets it, or at least part of it.

YES! It is an agenda to enshrine the racial history of this country as an important aspect of our national story. Thanks for saying the quiet part out loud…and that you have a problem with black history, you stupid racist idiot.

Funny thing: None of these representatives has a problem with Christmas being a federal holiday even though it’s discriminatory on religion, gives federal workers another day off, and is based totally on myths. I mean, we don’t even know what day Jesus was actually born or if he was even Jesus. He could have been a guy who just preached a lot. At least with Juneteenth, we know what day that happened. Christmas may even be unconstitutional, but good luck to the politician who campaigns on that one. If you think they’re giving Ilhan Omar a hard time now, wait until you see what happens to the poor schmoe who promotes de-federalizing Christmas.

Christmas as a federal holiday is forcing non-Christians to acknowledge Christmas, which most probably don’t mind (just don’t make me eat ham or listen to Hall and Oates’ “Jingle Bell Rock” and we’re good). Now, Republicans are afraid Juneteenth will force white people to acknowledge black history while all along, they’ve been shoving white history down everyone’s throats. These same fuckers probably believe the battle of the Alamo was about a bunch of freedom-loving (slave-owning) Texans being persecuted by Mexico. By the way, John Wayne was a HUGE racist. Look into it.

If we ever successfully remove these racists, whether judging gymnastics, legislating history, or voting against black history in the United States Congress with excuses like it’s “weaponized” or “unhealthy,” that day will be our independence day. It’ll be the day we’re liberated from troglodyte knuckle-dragging cave-dwelling Cheesecake Factory-loving Fox News-watching racist jerks who all probably just rolled off their moms.

And that should be a federal holiday.