You are here: Home / African-Americans / HYPOCRISY ON PARADE: PRAISING JOHN LEWIS WHILE RUINING HIS LIFE’S WORK 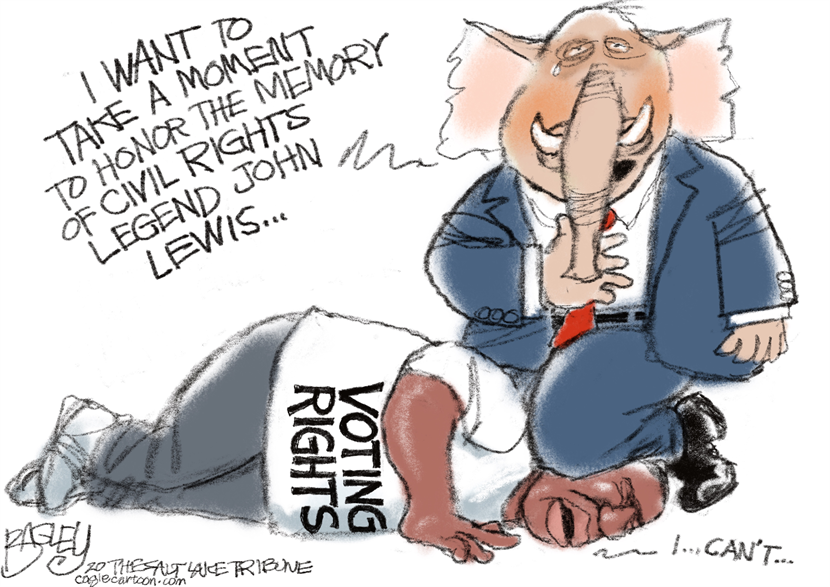 In “The Verdict,” a sleazy lawyer played by Paul Newman crashes a stranger’s funeral and cons the widow with a blast of blarney about her late husband: “I knew him vaguely through the Lodge. He was a wonderful man.”

I thought of that scene while reading the Republican tributes to John Lewis. The civil rights icon had fought all his life for voting rights, for equal access to the ballot, and high-ranking members of the GOP paid obeisance this past weekend with faux fulsome words.

House Republican leader Kevin McCarthy lauded Lewis as “a patriot in the truest sense,” and looked back fondly on a memorial march he’d made with Lewis across the famous Edmund Pettus Bridge. McCarthy called it “one the greatest honors of my life.”

Down in Lewis’ home state, Gov. Brian Kemp called Lewis “a civil rights hero, freedom fighter, devoted public servant, and beloved Georgian who changed our world in a profound way.” It was enough to make your eyes misty.

And up on Capitol Hill, Senate Republican leader Mitch McConnell swooned, “Our great nation’s history has only bent toward justice because great men like John Lewis took it upon themselves to help bend it…He endured hatred and violence. But he kept working because he was convinced that our nation had to be better.”

The gall of those people. Their honeyed rhetoric is rank hypocrisy, because all three have sought to undercut Lewis’ life work.

Last winter, Kevin McCarthy voted against an historic House bill, co-sponsored by Lewis, that would make it harder to disenfranchise minority voters. Two years ago, Brian Kemp became governor after leading a Republican effort to make voting more difficult, purging 1.5 million voters from the Georgia rolls. And Mitch McConnell, the most powerful figure in the Senate, has been sitting on Lewis’ House-passed voting rights bill for the last seven months, refusing to bring it up.

In the words of former Obama attorney general Eric Holder, their paeans to Lewis are nothing more than “performance mourning.”

As a young activist, Lewis played a crucial role in pushing Washington to pass the Voting Rights Act of 1965, designed to help minorities gain equal access to the ballot – especially in states, mostly in the South, that had long suppressed minority voting. States with a history of ballot discrimination were put under close Justice Department scrutiny.

Such was the law of the land – until 2013, when the U.S. Supreme Court gutted the Voting Rights Act. The Republican appointees erased the Justice Department’s enforcement powers, insisting that such oversight was no longer needed. John Roberts declared (in one of the most hilarious lines of 2013) that racial disenfranchisement “is no longer the problem it once was.” And Antonin Scalia called it “a perpetuation of racial entitlement.”. John Lewis told a reporter that Scalia’s remark made him want to cry.

But Chief Justice Roberts had given Congress a wee bit of wiggle room: lawmakers could find a way to revise and update the Voting Rights Act – enabling the Justice Department to stop voter suppression without picking on the southern states so much – then, yes, it could live on. That’s precisely what Lewis was trying to do, with his Voting Rights Advancement Act.

Alas, Mitch McConnell – for all his high-flown rhetoric about Lewis bending the arc of justice – has consistently refused to lift a finger for voting rights.

That’s ironic, because when the Voting Rights Act was up for renewal back in 2006, the Republican House and the Republican Senate passed it overwhelmingly…with a thumbs-up from McConnell. Their reasoning: “40 years has not been a sufficient amount of time to eliminate the vestiges of discrimination…and to ensure that the right of all citizens to vote is protected as guaranteed by the Constitution.”

Unless or until these hypocrites are driven from power, John Lewis’ life work will remain unfulfilled.