Categories Menu
Home » Humor » How Erdogan might have replied to Trump 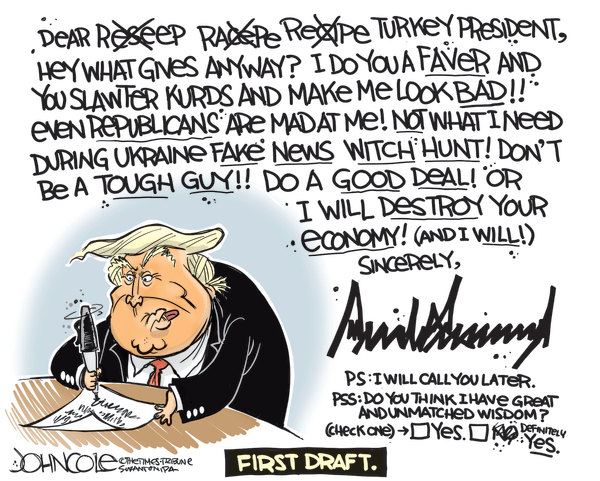 We already worked out a good deal. You outsourced the slaughtering of Kurdish terrorists in Syria so your government could defend its Southern border from the Latino invasion. Don’t worry about the escaped ISIS prisoners. They all plan to immigrate to London and Paris. You don’t want to be responsible for Kurds revolting against Turks, just as the Ottoman Empire was not responsible for committing genocide against the Armenians during World War One. Yes, we released Pastor Bronson. Isn’t it time you extradite that renegade Muslim cleric Michael Flynn lobbied to deport?

Iran, Russia, and Syria have worked hard to enable US forces to go home. Don’t screw it up! This is the kind of perfect deal you have struck with Kim and Putin. You concede to their wishes, and the US gets nothing in return. Maybe Denmark will finally negotiate with you to buy Alaska.

FOX News and RT will look upon you favorably if the US leaves the Middle East. Otherwise, you will be accused of repeating the mistakes made by George W. Bush and Barack Obama. Make America Genial Again! Get this done. You don’t want anyone to think you are beholden to the devilish deep state. Donny, you’re not a tough guy; you’re a fool.

Baron is professor emeritus of history at San Diego State University. He may be contacted via [email protected] San Diego Jewish World points out to new readers that this column is satire, and nothing herein should be taken literally. This article is reprinted from San Diego Jewish World which, along with The Moderate Voice, is a member of the San Diego Online News Association.