Robert Hyde has admitted that he managed a series of Facebook pages that were defending his name and actions since he has been implicated in the Trump impeachment story.

His name surfaced in a trove of documents released this week relating to Trump’s impeachment and the Ukraine. It included a series of encrypted messages that Hyde exchanged with Lev Parnas, the indicted associate of Rudolph W. Giuliani, Trump’s personal lawyer. Both men are at the center of the Ukraine investigation.

On Friday, Facebook deleted the pro-Hyde pages for violating its terms of service (TOS), according to the Wall Street Journal.

“The pages described themselves as representing groups of supporters of President Trump from different states, and several of them had the same contact information and other details as Mr. Hyde’s Republican campaign for a House seat in Connecticut (emphasis added),” according to the WSJ.

“When we find networks of pages misleading people by concealing who controls them, we require those owners to show additional information. In this case, the necessary disclosure was not made, so per our policy, the pages have been removed,” a Facebook spokeswoman told the WSJ.

Propaganda is information designed to promote or publicize a particular political cause or point of view that presents information selectively in order to encourage a specific perception.

On Saturday, Hyde acknowledged that he was managing all of those pages with this angry tweet, where he tacitly admits to violating TOS and, in the process, threw a dart at Rep. Adam Schiff, Democratic chairman of the House Intelligence Committee. 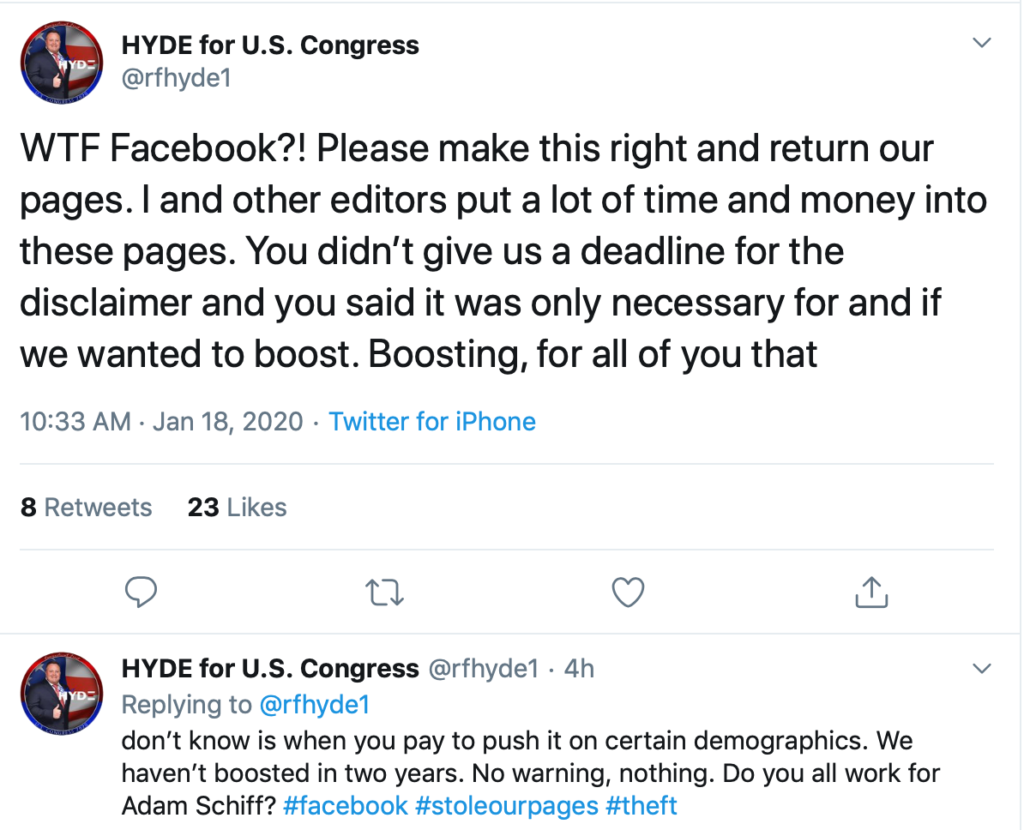 Last year, BuzzFeed News reported that at least 23 pro-Trump pages linked to Hyde spread a meme that said “Lock up Adam Schiff for treason.” Facebook took no action in November.

Within minutes of one another, at least 23 pages with state-themed names such as Ohio Supporters for President Donald J Trump and Iowa Supporters for President Donald J Trump shared an image of Schiff with the words “Lock Up Adam Schiff for Treason” and “Make American Great Again” encircling his head. This was one of two anonymously run pro-Trump networks of pages identified by a researcher and BuzzFeed News that share memes and stories, some of which are false or misleading, in a coordinated fashion. When contacted for comment, Facebook told BuzzFeed News the two networks do not violate its policy against coordinated inauthentic behavior.

Who is Robert Hyde? Lev Parnas?

So who is Robert Hyde and Lev Parnas, and why are they important?

Hyde is a 40-year old Trump booster who has been running for Congress in Connecticut. He is a former landscaper who “pumps a lot of money into the Trump campaign. But where he gets that money is largely unknown.”

The recently released documents show that Hyde was texting with Parnas about former ambassador to Ukraine, Marie Yovanovitch.

And this Rob Hyde guy in Connecticut says he knew where she was at any given time. He was tracking her movements. He knew when she was by the embassy, away from the embassy. He knew when her phone was on or off. And this raised the question, wait, was she being secretly surveilled from somebody connected to Giuliani? That is a question. We don’t know the answer to it for sure.

According to the NY Times:

The conversations drew alarm from Ms. Yovanovitch, who was removed from her post on Mr. Trump’s orders, and on Thursday, the police in Ukraine said they had opened a criminal investigation into possible illegal surveillance. In addition, F.B.I. agents visited Mr. Hyde’s home and business, according to a law enforcement official. The official did not say whether Mr. Hyde had been questioned.

Having the DOJ raid this man’s house now is pretty much the same as locking the barn door after someone steals your horses.

In October, Parnas pleaded not guilty to a federal indictment “accusing him and Igor Fruman of funneling hundreds of thousands of dollars in foreign money into U.S. elections, including a pro-Trump super PAC.

Earlier in January, U.S. District Court Judge Paul Oetken “granted Lev Parnas’ request to turn over to the House intelligence committee documents and data seized by federal investigators when Parnas was arrested in October,” according to AP. Federal prosecutors had told Judge Oetken that “they were considering filing additional charges against the two men, one of several issues that have delayed the judge from setting a trial date in the case.”

The excerpts show Parnas acting as a conduit between Giuliani and current and former Ukrainian officials, including several close aides of Ukrainian President Volodymyr Zelensky.