Democracy inaction in Britain and the U.S 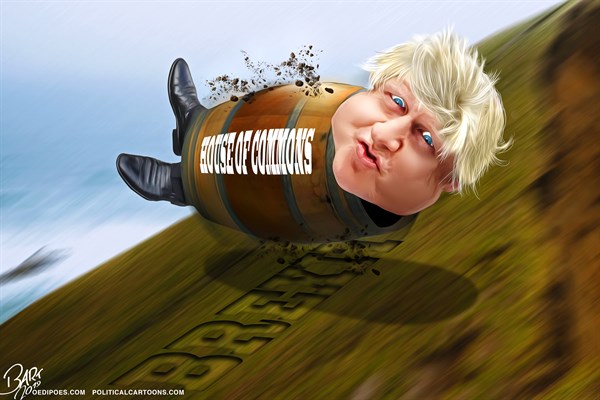 Two stories at the center of the news — the Brexit mess in Britain and the U.S. Senate’s failure to act on gun violence — should force us to think hard about what it will take for historic democracies to make their systems work again. We need to accept that different conceptions of democracy sometimes contradict each other, and that some of our governing structures are the antithesis of democratic rule.

The implosion in the UK has created what usually sober and moderate analysts have taken to calling a “revolutionary moment.” Prime Minister Boris Johnson took office this summer committed to getting his country out of the European Union by Oct. 31, even if he failed to make a deal with Britain’s former EU partners to minimize disruption.

He insists that all he is doing is living up to what 52% of British voters supported in the 2016 referendum by casting their ballots in favor of leaving the EU. Opponents of “no-deal” Brexit argue that the majority for “leave” was not a majority for the chaos that crashing out of the EU could leave in its wake.

Johnson — made prime minister by the 92,000 members of his Conservative Party in a country of well over 45 million eligible voters — knew he lacked a majority in Parliament for a no-deal Brexit. So he tried to get around Parliament by “proroguing” it. After a brief sitting this week, under Johnson’s ukase, Parliament was not scheduled to meet again until Oct. 14, leaving him with a lot of unaccountable power.

But Parliament wouldn’t have it. A 328-301 vote on Tuesday, in which 21 members of Johnson’s own Conservative Party bolted to the opposition, gave Parliament control of the process — and the 21 dissenters were thrown out of the Conservative Party. On Wednesday, the House of Commons passed a bill to block a no-deal Brexit.

Note how many times I have used the word “majority,” and how everyone in this debate claims the “real” majority is on their side. There is also a tension between the majority in the Parliament elected by the people and the majority verdict the people rendered in the referendum.

Polls make a good case that many who voted for Brexit did not expect it to be this difficult — Brexit supporters such as Johnson suggested it would be a piece of cake — and that no-deal Brexit is not popular. Writing on the BBC’s website, the respected British political scientist Sir John Curtice calculated that an average of the polls shows 44% opposing no-deal Brexit, with only 38% favoring it. Of the rest, 11% said “neither” and 10% didn’t know. There is no majority here — and very little support for crashing out.

Personally, I am on the side of those in Britain who want a second referendum now that everyone knows just how messy this process is. A 21-year-old anti-Johnson demonstrator shrewdly echoed words once used by a Brexit advocate. “If a democracy cannot change its mind,” Caitlin O’Hara told The New York Times, “it ceases to be a democracy.” Referendums, in principle the most democratic way of solving problems, can be highly imperfect instruments in gauging the public’s will, especially when the views of a significant number of those making a binary choice are complicated or contingent.

When it comes to gun control in the U.S., the democratic failure is more straight-forward. In blocking a vote on a House-passed bill requiring universal background checks, Senate Majority Leader Mitch McConnell is clearly foiling the will of an overwhelming majority of Americans. A July NPR/PBS NewsHour/Marist poll found that 89% support background checks, including 84% of Republicans.

It’s not just that the Senate is a wildly undemocratic institution — 41 senators representing about one-fifth of the country’s population can block action through the filibuster. It’s also that organizations with extreme views on guns hold outsize sway over the GOP. As a Washington Post editorial spotlighted this week, it seems that no number of casualties from mass shootings will ever be enough to move McConnell off “his insistent inertia.”

So friends of liberal democracy need to revisit the classic questions about what direct role voters should play, how referendums should be structured, and what decisions are best made by representative bodies.

And in the United States, we need to confront how radically undemocratic the Senate has become. Perhaps the mass-shooting crisis will force us to acknowledge that what fancies itself as the world’s greatest deliberative body is now one of the free world’s least representative institutions.