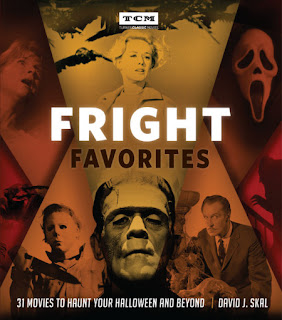 David J. Skal has a long resume of writing genre-intensive books on the horror genre. I’m sure many readers have enjoyed his film, etc., critiques in The Monster Show and Hollywood Gothic. And his biography of Bram Stoker, Something in the Blood, was an informative, provocative read, one of my favorite birthday gifts.

Just a few days ago, Skal’s new book, “Fright Favorites: 31 Movies to Haunt Your Halloween and Beyond,” arrived at book stores and online retailers. It has a 2020 copyright from Turner Classic Movies and is published by Running Press, of Hachette Book Group, New York City. Amazon sells Fright Favorites. I was fortunate enough to receive a review copy.  Here is a link to Running Press. And also, here is Skal’s Amazon page.

Although veteran genre fans will enjoy this book (I sure did), it’s just as much geared toward the casual viewer of horror films; those ones who draw a blank when “Nosferatu” or “The Mystery of the Wax Museum” (1932) are mentioned. Skal provides a brief history of Hollywood horror of the past 98 years, and even longer if you read his introduction on film culture’s long, evolving relationship with October’s spooky season.

I really enjoyed learning a little more about the backstory of a film. Skal offers tidbits from a featured film that you might not have known. Myself, for example, never knew that early plans for the giant ants attack film “Them” originally planned to have the ants invade the New York City subway system. Instead, the budget dictated that the ants visit the cheaper-to-film Los Angeles storm drains.

Another thing learned was that William Castle, director of tongue-in-cheek horrors, was the initial driving force to bring “Rosemary’s Baby” to the screen. He did not direct it, of course. Paramount did not want a gimmicky adaptation along the lines of a “13 Ghosts.” Castle took on the role of producer.

The wonderful films discussed include. “Nosferatu,” “Dracula,” “Frankenstein,” “The Mummy,” “Dr. Jekyll and Mr. Hyde,” (1932), “The Wolf Man.” Universal of course dominates the early offerings, the aforementioned “… Wax Museum” and “… Jekyll and … Hyde” are from other studios.

I enjoyed seeing RKO’s “Cat People” getting an inclusion, as well as Allied Artists “Invasion of the Body Snatchers.” Hammer Films get its due with “The Curse of Frankenstein” and “Horror of Dracula.” Offbeat imports from greats such as Mario Bava are included, as are films indicative of the switch to gore, very dark comedy and downbeat endings, such as “Night of the Living Dead,” and Rosemary’s Baby.” In fact, the final of the 31 films is 2017’s “Get Out.”

Film directors/producers such as Roger Corman, with his Poe films, and William Castle, are included. Other appropriate inclusions are “The Exorcist” and Mel Brooks’ perfect spoof/homage “Young Frankenstein.”

Your reviewer was born in 1963, and he appreciates Skal including the films I saw faithfully (to a fault), such as John Carpenter’s “Halloween,” “Nightmare on Elm Street,” and the delightfully dark, infamous “Friday the 13th.”

I mention “Friday the 13th”  because it’s included with 30 other films in the “If you’ve enjoyed …., you might also like” section of the book. So there are really 62 films to sample in this book. Some of these runner-ups — with large-capsule summaries — include “The Black Cat,” (with Karloff and Lugosi), Dario Argento’s classic “Suspiria,” (1977), the recent horror flick “The Conjuring,”‘ and James Whale’s great dark horror comedy “The Old Dark House.” (1932), once lost for decades.

To be even more precise, there are likely closer to 90 films discussed as Skal frequently offers his comments on sequels to the 31 main films noted, including the Universals and Hammers.

The 31 chapters on the featured horror films have summaries and analysis which are neither too long or too short. The casual fan, just learning about the horror film genre, would likely get bored if the chapters were the length of, say a Midnight Marquee Press book, or one of Danny Peary’s books on cult films. (Both MMP and Peary are valuable reads, by the way). But these chapters are roughly 5- to 10-minute reads and will whet an appetite to see a film profiled. I cite myself as an example: I have never seen two comedy offerings, “Hocus Pocus” and “Beetlejuice,”‘ but plan to see both — in October, of course.

If you buy the dead-tree edition, “Fright Favorites” is a slightly oversized book — with an abundance of photos — perfectly appropriate to sit on your coffee table, to be read in an easy chair or couch, at your leisure. It would be so cool for Turner Classic Movies to show these films, all 31, from Oct. 31 to Halloween.

Maybe that will happen one day. But until then, just about all are easily accessible via streaming. So one could indeed watch one a day this Halloween season. (This review is cross-posted at Plan9Crunch blog).