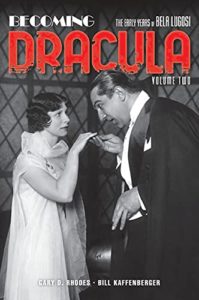 There’s an interesting photo of an advertisement in “Becoming Dracula: Volume 2,” BearManor Media, 2021 (Amazon link). It’s a 1928 ad for Listerine mouthwash, published in Photoplay magazine. On the right, inconspicuous, is definitely Bela Lugosi, already known as a Broadway, and feature film actor. Lugosi must have been paid for the subtle modeling act. Authors Gary D. Rhodes and Bill Kaffenberger wonder if there are other, still-yet-to-be-discovered ads with Lugosi of that era. I’d wager yes. 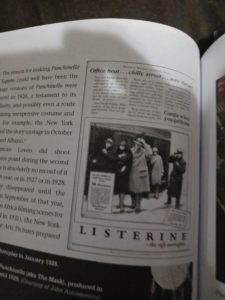 The photo underscores two essential truths about Bela Lugosi’s three-plus decades in America. He was both — by all rational assessments — a successful actor, and a man nearly always in need of money. Even when he had achieved successful working-actor status in America, he made regular forays into the U.S. Hungarian stage scene, often taking the role of director or headlining for a night. These gigs were partially motivated by money, the authors surmise.

“Becoming Dracula 2” is, like its predecessor, “Becoming Dracula: Volume One, the Early Years of Bela Lugosi,” a marvelous mixture of dedicated research and enjoyable style. Through old media sources, many very obscure (long-gone U.S. Hungarian newspapers) and I’m sure not easy to track down, the authors chart Lugosi’s slow but steady emergence as a respected stage and screen actor through the 1920s and early 1930s (up to “Dracula” film).

Bela may have arrived in America penniless, but he already had a reputation as an actor in Europe, and quickly found work in various Hungarian stage groups. The Hungarian presence in the United States was large enough to support acting troupes, and Hungarian U.S. newspapers were around to cover it all. Hungarian works, such as “The Tragedy of Man,” were featured.

It wasn’t long before Bela’s skill made him an attractive option for English-speaking theaters. One of his more significant early plays was “The Red Poppy,” which featured a popular star of the era, Estelle Winwood. Lugosi’s scenes with Winwood were noted by critics.

Bela appeared on the stage with co-stars who would also achieve huge success, including Leslie Howard and Fredric March. One of his Broadway plays, “Arabesque,” in which his character shared passionate scenes with actress Hortense Alden, shocked audiences. (See Lugosi and Alden below). 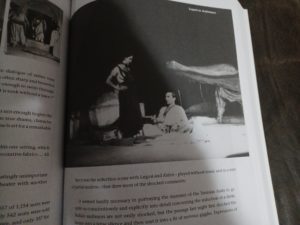 Besides staying busy on the stage, the authors detail Lugosi’s resumption of a movie career in the 1920s. His earlier films, from mid-size producers, include “Silent Command,” “The Midnight Girl,” “The Rejected Woman,'” and “Daughters Who Pay.” Watching these films reveal an actor with strong screen presence, one who attracts the camera’s attention, whether playing a hero or villain.

Playing “Dracula” on Broadway led to Bela getting that defining film role. The journey to filming “Dracula” is interesting. Rhodes and Kaffenberger provide a detailed log of events, including Bela accompanying the play to the West Coast and its continued success there. A host of actors were considered. Lugosi gradually became a Los Angeles-based actor, a move that would last the rest of his life. The authors detail Bela’s persistent efforts to retain his coveted role for the film, including shrewd marketing efforts. He made sure he was playing Count Dracula for a brief stint in Oakland as final casting was being set.

Lugosi also parleyed his stage success with more films, including a contract with Fox for a few pre-Dracula films. He also had a major role, although inexplicably billed seventh, in “The Thirteenth Chair.” It was for MGM, and directed by Tod Browning, who would helm “Dracula.”

Despite being busy as an actor between the play, “Dracula,” and the film version, Bela was still feeling financial pinches. The authors include correspondence from the actor where he expresses displeasure with his finances and career. Lugosi would find ways to make money providing Hungarian dialogue for U.S. films. He also appeared in short films, some of which are likely lost. He may have had some roles where his scenes were deleted.

The authors capably detail much of Lugosi’s personal life, including two failed marriages and his well-known affair with screen star Clara Bow. One marriage, with an heiress named Beatrice Weeks, provides insight into the actor’s mind. He was likely prone to impulsive decisions. He also had a traditional, for the time, Hungarian male perspective of marriage, with the man working and the woman serving. This led to a quick divorce with the independent Weeks, who was apparently also prone to impulsive acts.

“Becoming Dracula: Volume 2” is a joy for genre purists; as Volume 1 was. Volume 2 respects the first volume by starting with, Chapter 21. We revel in the minutia that Rhodes and Kaffenberger have painstakingly logged; the footnotes are dessert. There’s 10,000 facts to learn that I have not included in this review.

But the ease of reading and good-natured occasional observations from the authors also make this a wise choice for the casual reader. It provides a primer for how actors moved through the stage and film worlds 90-plus years ago. I think both “Becoming Dracula” volumes would be valuable texts for film classes. I’d love to see this writing style used for other famous actors, say Boris Karloff. The poring over of obscure, mostly forgotten publications — a healthy percentage only saved with crumbling print — guarantees that new scholarship is logged.