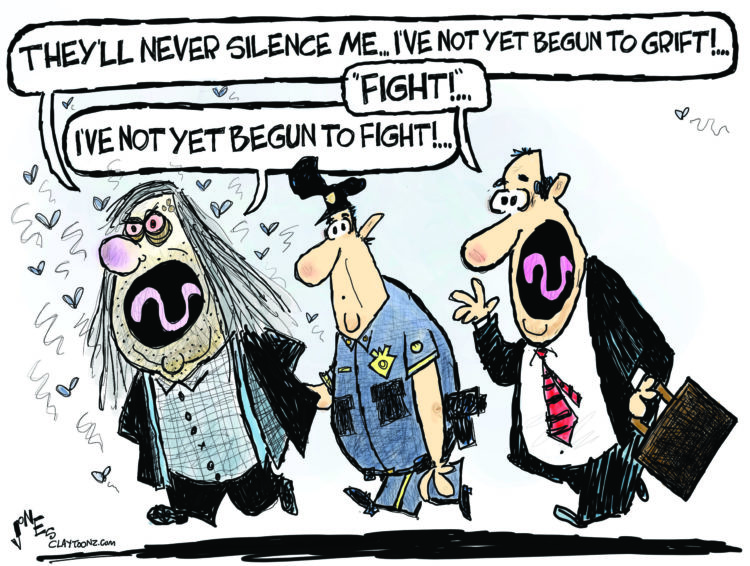 A Grifter’s gotta grift, and this grifter may possibly be grifting his way into a state prison.

Steve Bannon, former chairman of neo-Nazi publication Breitbart and former chief racist advisor for neo-Nazi president (sic) Donald Trump, has been indicted for the second time on a scheme to defraud stupid MAGAts to make donations to “build the wall.”

Did I say second time? Yes, I did. Bannon was previously indicted on federal charges for this scheme to defraud racist Trump-supporting idiots, but stupid idiot Trump pardoned him when he was actually president (sic), and not afterward when he was pretend president.

Bannon is also facing charges for failing to comply with a congressional subpoena.

New York prosecutors say Bannon played an integral role in an organization known as We Build the Wall Inc, which was designed to bilk Trumpers to fulfill their hero’s pledge to build a racist wall on our border with Mexico. Except, when racist Trump made that racist promise, and as the central theme of his racist presidential campaign, he told us Mexico would pay for it.

During the Trump presidency (sic), Mexico never sent one peso to pay for the wall and Congress never provided funding. Instead, Trump raided the Defense Department’s budget to build the wall. By the time Trump fled Washington with his tail between his legs on President Biden’s inauguration day, only 82 miles of the wall were constructed where there was no barrier previously. According to Customs and Border Control, 452 were built but minus that 80, all of that was funded by previous administrations (Bush and Obama) to replace existing barriers.

The irony Trumpers don’t get is that by donating money to a private source to build the wall, they’re admitting Trump failed at delivering his promise. Also, what was the plan for a private organization to start building a wall on the southern border where they have no authority? They raised $25 million on a promise to build a wall they can’t build. Did I mention MAGAts are stupid?

You don’t own the libs by allowing yourself to be grifted by racist smelly fascists.

Prosecutors claim Bannon funneled more than $100,000 in donations to the organization’s president, Brian Kolfage, who had repeatedly promised not to take a salary. State Attorney General Letitia James said Bannon also profited off the scheme.

The United States Constitution says you can’t be tried twice for the same crime. While Bannon did a lot of “in your face” to liberals when Trump pardoned him, his charges in New York don’t qualify as double jeopardy because Trump pardoned him BEFORE there was a federal trial. As Nelson Muntz would say, “Ha-ha!”

James said, “Regular, everyday Americans play by these rules, and yet too often powerful political interests, they ignore these rules. They think they are above the law, and the most egregious of them take advantage.” MAGAts do believe they’re above the law. Look at the Mar-a-Lago case. MAGAts are screaming that Donald Trump should be allowed to steal government secrets and sell them to Russians and Saudis. They equate Trump stealing government documents to not returning library books, which makes sense to people who have never been to a library.

Evidence in the federal trial of one of the group’s founders this year showed that $380,000 was transferred to a nonprofit controlled by Bannon in 2019. Then, hundreds of thousands went to Kolfage and to Bannon. In February and March of 2019, more than $330,000 was transferred from Bannon’s nonprofit’s bank account to Bannon’s personal bank account.

I believe the term for this is “grifting,” but if you prefer “swindling,” we can go with that.

Bannon said he’s being targeted for building “the dominant platform in all media for grassroots participation” and that prosecutors want to take him down ahead of “the most important midterm election since 1862, since the Civil War,” when his side lost fighting to preserve slavery.

During Bannon’s perp walk, he said, “They’ll have to kill me first. I’ve not yet begun to fight”

How much do you want to bet that Bannon goes to prison without being killed? These people are cowards. They’re really good at calling for others to fight and to go to prison for their fascist causes, but them…not so much.

Just as Trump believes he’s “making America great again” by trying to steal an election, have himself installed as Oompa-Loopma dictator, and steal government documents to sell to our enemies, Steve Bannon believes he’s saving America by grifting Trumpers. Holy sh–. He might be right.

If Steve Bannon grifts MAGAts out of all their money so he can buy more shirts to wear all at once, then those Trumpers won’t have any left to buy guns and gasoline for driving across the nation for insurrections and Molotov cocktails.

Bannon is a racist, fascist, Nazi crook. So is Donald Trump. Hopefully soon, these lovers of racist walls will be surrounded by walls.

Visit Clay Jones’ website at and email him at [email protected]