Posted on October 19, 2021
You are here: Home / Bigotry / Antisemitism Is Wrong, Whether Coming from the Right or Left 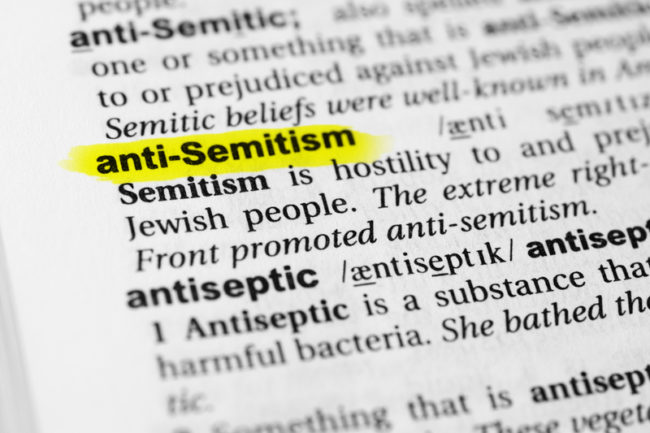 Left-wing advocates deny antisemitism by citing free speech to criticize another nation; however, the International Holocaust Remembrance Alliance’s examples of antisemitism reveal this “free-speech” ploy as a sham.

All groups can point to prejudices and stereotypes. These become pernicious when they form barriers, justifications for expulsions and mass murder. Jews have been expelled from many countries beginning in the 8th century BCE (from Samaria by King Tiglath-Pileser III) to ancient Rome, France, Portugal, Austria, England, Haiti and into the last century in the Middle East.

And for what? To force conversion to another religion? Sometimes. Unexplained hatred? Sometimes. To maintain racial purity ? as expressed in Germany for an ethno-nationalist Aryan culture? All were motivations for Jew hatred.

What of Jew hatred in the United States? The cloning of antisemitism in different garbs suggest a different logic for each. Left- and right-wing logics require a diverse view of this virulent disease.

Right-wing antisemitism is generally explicit. A typical statement was expressed by Andrew Anglin before a march in Whitefish, Montana, in 2016:

“Currently, my guys say we are going to be able to put together about 200 people to participate in the march, which will be against Jews, Jewish businesses and everyone who supports either.” The comment ran with a graphic of the Auschwitz entrance, a yellow Star of David, and the word “Jude.”

That is naked Jew hatred. And that hatred has been broadened with the slogan, “You will not replace us.”

According to the Anti-Defamation League, “The slogan speaks to a number of issues that white supremacists are preoccupied with — the preservation of the white race and white cultural history, and their fear that whites will become a powerless minority in the face of changing demographics.”

However, we should be cautious in a naive rejection of “replacement theory.” Cultural issues of “who we are” are often debated in terms of language, politics, voting, residence and the like. This is the thorny area where intellectual. ethical and legal issues clash. The problem arises when that debate becomes a partisan sword and the antagonists can no longer discern who is wielding the sword against whom.

Left-wing antisemitism is generally cloaked in intersectionality, where perceived marginalized groups find solidarity in being oppressed. And Jews, who have fought hard to be accepted in American, are now questioned as sufficiently oppressed.

For example, in an action filed with the EEOC last year, Jewish mental health workers at Stanford University sought to have anti-bias trainers include antisemitic content along with anti-Black content. However, the committee members “justified the omission of anti-Semitism by insisting that unlike other minority groups, Jews can hide behind their white identity.”

Another way of cloaking antisemitism is by attacking Israel as an oppressor since, so the argument goes, one can criticize a country like Israel and not be antisemitic. This approach recently surfaced in a resolution passed by a San Diego community college teacher’s union that claimed not to be antisemitic but launched into statements which, based on the definition and examples of the U.S. Department of State, are in fact antisemitic. A similar resolution was rejected by a national union earlier this summer.

The International Holocaust Remembrance Alliance provides examples of how such antisemitism can be spotted, including:

“Applying double standards by requiring of it a behavior not expected or demanded of any other democratic nation.”

“However, let us be clear that condemning Israel for its ethnic cleansing of Palestinians, occupation, apartheid and war crimes is not antisemitism.”

If the resolution were honest, it would point out that the small state of Israel is quite unlike the surrounding Arab and Iranian states with over 200 million compared to a state of 12 million with about 20% Arab population. Israel is democratic where many of its neighbors are not, especially the Palestinian communities.

Israel has not indulged in a slow elimination of Christian populations, but has welcomed Ethiopians and Russians as well as hosting the persecuted Muslim offshoot of the Bahá?í Faith. Israel has a gay pride parade while neighboring Arab countries have oppressed its gay population.

Clearly, there is a double-standard and only Israel is singled out. This is Jew hatred in another form.

It is time to condemn all forms of antisemitism.

Joe Nalven is a former associate director of the Institute for Regional Studies of the Californias at San Diego State University. Republished from The Times of San Diego which, along with The Moderate Voice, is a member of the San Diego Online News Association.