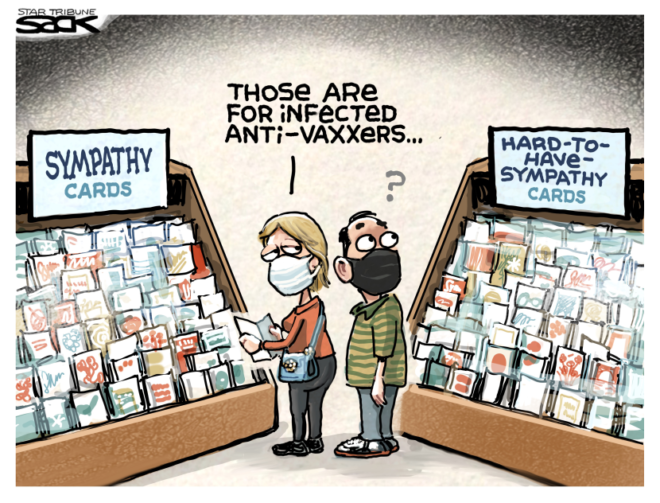 When society seeks to influence behavior, is it better to pay people to act a certain way, or to penalize them if they don’t? The pandemic and the urgent need for COVID-19 vaccinations brings the question into focus.

American Airlines offers employees an extra day of paid vacation if they get the shots. Delta Airlines, on the other hand, warns employees they will be charged a $200 monthly penalty on their health plan if they don’t get jabbed.

Kroger, the nation’s largest supermarket chain, gives employees $100 for proof of vaccination. But professional basketball players employed by the New York Knicks, Brooklyn Nets and Golden State Warriors learned recently they will not be allowed to play in home games this season if unvaccinated, and face possible fines or loss of pay.

A few companies are literally trying it both ways. Walmart, the nation’s largest private employer, will require employees at its corporate offices to be vaccinated, while making it optional for in-store workers — but offering them $150 if they choose to get the shots.

Much as I applaud the intentions of businesses and governments that offer monetary inducements for getting the shots, I think it’s unwise. We don’t pay motorists to stop at red lights, we fine them if they don’t. Companies don’t give bonuses to employees who refrain from harassing coworkers, they discipline the offenders.

Research into behavioral economics does show that incentives work in some cases. A study conducted by the Mayo Clinic found that participants in a weight-loss program lost more and stayed with the program longer when paid to do so. Researchers at Harvard Medical School got similar success in getting people to quit smoking.

In Canada a few years ago, private business partnered with government to operate “Carrot Rewards,” a program that essentially paid people to walk more. It utilized an app that measured steps and issued payoffs in the form of points used for merchandise. People walked so much that the funding ran out and the program folded.

For the most part, however, these reward-based programs are conducted among folks who wanted to change; the money reenforces their views rather than modifying them.

During the pandemic, government efforts to pay the unvaccinated have had only modest success. Ohio’s “Vax-a-Million” lottery was among the more effective programs, at least for a few weeks, but other state and local payoffs have not fared as well.

One of my concerns with behavioral economics — whether orchestrated by business or government — is that such programs exert disproportionately greater pressure on the poor. Walmart is essentially conceding that by offering $150 to its lower-paid workers, while issuing a vaccination mandate to higher-salaried employees for whom a cash inducement might be easier to ignore.

When it comes to encouraging COVID vaccinations, perhaps the ends justify almost any means. But since governments and businesses have the absolute right to require certain behavior — from paying taxes to wearing seat belts — there shouldn’t be a need for bribes, or for cowardice among lawmakers and employers. Make the rules and enforce the penalties.

As more COVID variants emerge, there is reason to believe that one or two shots won’t be enough. Annual boosters might be necessary. So then what? Employees who were paid to comply this year demand another dose of cash, or threaten to strike for higher vaccination pay?

Unfortunately, it will never be right to pay people to stop being wrong.