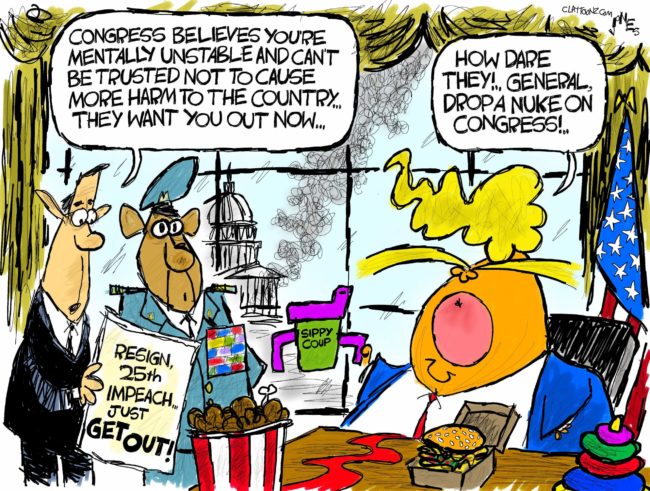 There are fewer than two weeks before Joe Biden is sworn in and can start to repair the damage from this disaster of a presidency. But what will Trump do in that time?

Donald Trump was still praising terrorists, telling them they’re special and that he loved them after the attack. He didn’t condemn it until his staff pressured him over the threat of being removed. Then, Donald Trump finally conceded that he will not be president after January 20 (a lot of his followers believe the “transitioning to a ‘new’ administration” is a “new” Trump administration without Mike Pence. Seriously). So, since Trump caved, you may believe he’s learned his lesson and will be on his best behavior, whatever that looks like, until the 20th.

After Donald Trump was impeached, Maine Senator Susan Collins said he learned his lesson…then he started firing everybody who testified against him and started breaking laws again. Republicans haven’t learned their lessons either. You can’t trust Donald Trump. Don’t believe me? Go ask Mike Pence.

During the riot, Mike Pence and his family were in the capitol. There were goons with zip ties seeking him out. Donald Trump called senators in the capitol…not to check on Pence’s safety but to keep strategizing on how to steal the election.

Donald Trump doesn’t learn morals, ethics, or lessons. After four years, you think he’s going to learn in the last two weeks? Get the fuck out of here.

And Donald Trump should get the f*** out of here.

The best thing for everyone would be if Donald Trump resigned, but since he hasn’t done it yet, that’s not going to happen.

The second best thing would be for his cabinet to remove him. Of course, they haven’t learned yet that we can’t trust Donald Trump. There are arguments that removing him will make uniting the nation even more difficult. But really? That ship has sailed. Quite frankly, I don’t give a rat’s ass about unifying with people who support terrorists. I don’t need unity with people who put a cult of racist personality before their nation. I don’t need unity with people who bring pipe bombs and Molotov cocktails to a protest. Unity with zip-tie guy and Chewbacca bikini? Unity Schmunity.

That brings us to impeachment. Sure, it won’t remove him…even if the Senate was on board. There’s no way both chambers in Congress could move that fast and cooperate…even if you get ten Republicans in the Senate who realize Donald Trump is freaking lunatic and a threat to national security, and agree to toss him out. Plus, there are still traitors and supporters of terrorists in both chambers. By the way, all those idiots need to be removed too, and that includes my treasonous Congressman, Rob Wittman.

Call me “Crazy,” but I don’t think people who oppose elections should hold elected office.

And if you can get the Senate to go along, impeachment and conviction may bar him from serving again. There’s a huge dispute on that.

Let’s touch on that dispute. There are memes going around that a “removed” president can not receive his pension, office, staff, Secret Service protection, and other assorted goodies. The argument here is: If he’s removed, then he’s no longer a “former” president, which is what the law says he must be to collect all the benefits. If Congress does not remove him and the Senate convicts him AFTER he’s president, then he’s still a “former” president and will still be eligible for the benefits. You can’t remove somebody after they’re gone. I’m unsure about him being eligible for running again. But make note, being in prison does NOT prohibit one from running for president. People in prison have run for president…from prison. And still that guy wasn’t “uniquely” unqualified for the presidency.

The most important thing (after not playing with the nuclear codes) is that Donald Trump not be president again. Nearly half this nation still supports him. A poll over the weekend showed that 45% of Republicans approved the terrorist attack on Congress. 53% say it’s not Trump’s fault. 50% of Republicans called the terrorists “protesters” and 30% called them “patriots.”

If Mike Pence and the cabinet are patriots, they’ll remove him NOW. Now! Now! Now! As it is, the terrorists are planning another attack, perhaps on the 20th. If I know this, then Donald Trump knows it. Has Donald Trump issued a statement telling his supports to “stand down?” No.

Make the White House like the house in Amityville and have a loud voice say, “GET OUT!” And now it occurs to me, have we considered an exorcism?