It’s Time of ‘Imagine the Unimaginable’ as Iran Festers 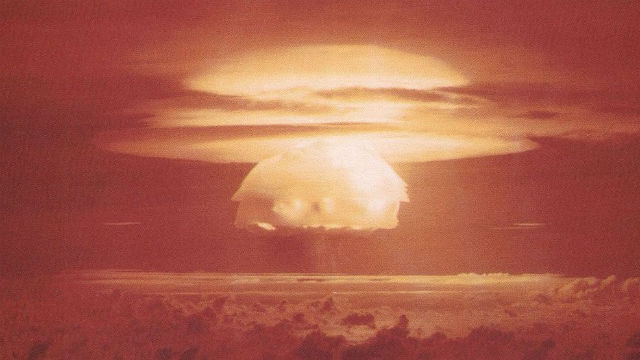 The mushroom cloud from the Castle Bravo hydrogen bomb test in 1954. The bomb was 750 times more powerful than the weapons that destroyed Hiroshima and Nagasaki. Photo via Wikimedia Commons

I once taught an upper-division seminar at UC Riverside titled “Strategies of Defense in the Nuclear Age.”

The prompt for designing such a course was the simplistic, but serious responses of many undergraduates whenever I asked. “How would you solve this crisis?”

Lots of contemporary crises were available then—just as they are today.

These nonchalant remarks about the devastating power of a nuclear weapon caused me to add a whole section of actual film footage about the human as well as environmental consequences of Hiroshima and Nagasaki.

J. Robert Oppenheimer, who lead the scientific team that developed the first atomic bombs, famously pushed President Truman to stop any further development of such weapons. Edward Teller, the father of the more powerful hydrogen bomb, argued the opposite and prevailed.

Which brings us to today’s crisis. Iran’s desire to build a nuclear weapon—in the most unstable and unpredictable region of the globe with the most unpredictable players on the world stage—requires a serious answer to “How would you solve this crisis?”

Since President Trump withdrew from the Iranian Nuclear Agreement (which took 10 years of patient negotiating to get delineated with verifiable audits of compliance) things have deteriorated.

Enter the latest cliffhanger towards war in the Middle East—precipitated by the killing of Iranian General Qassem Soleimani.

Few argue with the terrorist credentials of the general, but was he an “imminent threat?”

Or was this just another of Trump’s habitual distractions to counter the unfavorable impeachment headlines? After all, President Nixon used similar tactics during his impeachment quagmire.

What lies ahead? Already more sanctions. More U.S. troops on the ground. Perhaps a miscalculation?

Ironically, it was a woman who challenged Nixon in the famous 1950 California Senate race, Democrat Helen Gahagan Douglas, who coined the phrase, “Imagine the Unimaginable” when it comes to nuclear war.

Today it also falls to a women—Nancy Pelosi—to challenge Trump’s power to go to war without congressional or constitutional authority.

Douglas, a member of Congress, friend of the Roosevelts, wife of actor Melvyn Douglas and a champion of civilian — not military — control of nuclear power deserves more attention in history classes.

She, like Pelosi, saw a nightmare scenario and worked to stop it.

And it occurred in an even uglier political time that today’s divisive politics—the infamous Sen. Joseph McCarthy era of anti-communist witch hunts and anti-Semitism.

Nixon’s allies distributed pink-colored flyers calling Douglas “pink, right down to her underwear.” And radio pronouncements declared that “she sleeps with a Jew.”

There is a thread here.

Cohn taught Trump to “double down,” “never apologize,” forget any facts and keep in the headlines—no matter the consequences. He advised Trump to insult, demonize and vilify opponents, while disregarding facts, evidence and ultimately the truth. The job is not to defeat your opponent, but to destroy him.

Cohn died of AIDS—denying it to the end. His current replacement? Atty. Gen. William Barr, who believes in an all-powerful Presidency.

Back to the warnings of Helen Gahagan Douglas. After evidence of the first atomic bombs were used in World War II, Congress debated where to lodge control of the new nightmarish potential of nuclear weapons.

Her argument was that in the hands of the wrong President, you must “Imagine the Unimaginable.”

Thus, the birth of the Atomic Energy Commission that transferred control of atomic energy from military to civilian hands—effectively giving the AEC complete oversight of the plants, laboratories, equipment, and personnel assembled during the war to produce the atomic bomb.

Contemporary efforts to deter other nations—specifically Iran—from developing a nuclear arsenal produced the Iranian Nuclear Accord.

Trump walked away from that accord. And Iran has resumed its nuclear program—which should cause everyone to “Imagine the Unimaginable.”

The lessons from my long-ago course on “Strategies of Defense in a Nuclear Age?”

Colleen O’Connor is a native San Diegan and a retired college professor. Her Ph.D. dissertation in history at UC San Diego was on Helen Gahagan Douglas. This article was published in The Times of San Diego which, along with The Moderate Voice, is a member of the San Diego Online News Association.